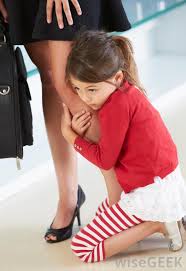 Eight- year old Josh is having meltdowns every day now that his sister’s wedding is getting closer.  He’s miserable, and his parents and sister don’t know what to do.  The entire household seems to be falling apart.   Josh has only been to one other wedding two years ago, his cousin’s, and that was enough.  The thought of going through all that again was not something he is prepared to do ever again. And that’s the problem, but no one knows it.  Josh can’t express or explain it.  He is consumed with fear and can’t discuss the issue.   His situation is becoming even more difficult for him due to his mother’s and his sister’s impatience and, at times, anger towards him.  He was brought to me to see if I could “reason” with him.  Josh’s father was on the verge of letting Josh stay home on the night of the wedding to avoid all the unpleasantness that he knew was coming.  Both parents reported that this is not the first time that Josh has behaved this way.  His mother thinks he’s spoiled, his father thinks “he’s a sissy”.

Most of us have been through this type of thing with at least one of our children-the absolute inability to function in normative situations which are, for some reason, very uncomfortable for them.  Even pleasant things, such as going to a swimming party that all the other kids are excited about, the class trip to the zoo, or a sleepover party can create havoc. What’s going on?  Why can’t some children (and adults) learn to weather some temporary discomfort in their life?

The neurobiological details of this phenomena are beautifully spelled out by Daniel Goleman in his book Emotional Intelligence in the chapter entitled “Anatomy of an Emotional Hijacking”.  That title says it all.  The two underlying issues are fear and difficulty with problem solving.  The child is so overwhelmed with fear that he bolts because the situation registers as DANGER! In his mind.  So many of my clients (and friends) believe that in cases when their child is so frightened, they need to come to the rescue.  “Don’t worry, sweetheart, if you are that uncomfortable, you don’t have to go” seems like the thing that a good, sensitive, parent (usually Mom) should say.  On the other side of this scenario is the parent who refuses to have any discussion about the matter.  “No child of mine is going to be such a spoiled brat!  Why can’t you be like all the other kids in the class?”   Neither approach is the way to go if we want to nurture confidence, self-reliance and the ability to chill out when needed.  The all-important tools of self-regulation, or to be more precise, emotional self- regulation and problem solving often need to be taught.

As Daniel Siegel describes so well in his book, The Developing Mind , “this capacity is crucial for the internal and interpersonal functions of the individual.”  Poor emotional self-regulation can be behind…..”these states of mind [which] are characteristic of dysfunctions in perception, memory, beliefs and behaviors.”  Anxiety disorders, explains Siegel, are often a flood of strong emotions that evoke a dysfunctional state of mind.  In other words, emotion has taken over “good sense”.  As any parent knows, it is a complete waste of time and energy to try to reason with a child (or adult, for that matter) who is in the midst of an all-out meltdown.  The reason for this is that our logical, thinking brain (the cortex) shuts down when our emotional brain (the limbic system) is triggered.  All humans operate this way; it is for our own protection, so that we do not keep on thinking about something that should be recognized and quickly dealt with as a threat.

What we would all like to do in a situation where there is no danger, yet the child is still very distressed, is to get the child to a state of calm that will allow him/her to really hear us, perhaps even to explain things to us.  In order to accomplish this, many parents opt for the old I’ll give in if you’ll just be quiet.  That will nearly always work because the child does not have to deal with the negative (and often frightening) thing anymore.  It is for exactly this reason that once we allow the child to escape the situation that is so upsetting to him, we cannot expect the child to listen to why he needs to “just try it next time”.  No matter how we try to explain how they really need to try something new, etc., etc., they don’t hear us at all because they now feel “safe”.  Discussion over.  That is, until the next time around and they can’t cope and have a meltdown and we come to their “rescue”……..it’s a dance that parents allow children to do. This dance can easily and quickly move on to other issues so that the child is, basically, running away and running the show.  That’s when parents let loose- and tend to overdo punishments which is really not accomplishing much with regard of teaching the child to deal with his emotional barometer in a way that does not include escaping unpleasant emotions.

The better and much more difficult way around this is to calmly tell the child that you will be with him, you will work it out with him, but not for him.  You must stay calm.  Let him tantrum. Let him know from the start that he will not get to avoid this situation, but that you will only give him small parts to deal with.  There are a number of simple breathing exercises that parents can do with their child at this point.

Back to Josh at my office:

For his first session, I requested that both his parents come as well.  I assured Josh that I was not at all an authority over him, but rather, a kind of interpreter between him and his parents.  I saw him relax.  After teaching Josh some easy breathing exercises that calmed him a bit more, I asked him to tell me the story in his mind of “Josh at his Sister’s wedding”.  He immediately clenched his fists and began breathing rapidly.  His story was one of intrigue, danger, uncertainty and confusion.  I found myself growing increasingly exhausted trying to follow Josh’s logic and story line.  When he was done, his parents were stunned into silence and I told Josh how I felt while he told the story.  I empathized with him and told him that we were going to “change the story”.

The first thing I had to do was to help Josh regulate his emotions in order to be able to organize his mind and learn some problem solving skills. The best way to do this is to cut the “story” (his feared situations) into chunks.  Then we reviewed, together with his parents, what would actually happen.  I will discuss two of him major fears from among at least a dozen.

Josh’s parents were stunned.  This scenario had never occurred to him.  First, they told Josh how sorry they were and how they had not understood him at all.  We agreed that Josh behaved appropriately considering how he understood the situation.  In his discussion of learning how to cope with being uncomfortable, Dr. Daniel Siegel explains that when a child remembers an experience as more negative than it needed to have been, it is because of a lack of problem solving and self-regulation abilities.  With this in mind, Josh was told a new story of weddings.

After discussing the rationale behind family picture taking at weddings, it was agreed that Josh would be called only once.  He really didn’t need to be in a lot of pictures, he said and that made sense to all of us.  Emboldened, he said he did not want to stay in the room with everyone, especially not the photographer.  Once again, we agreed and said what a good idea it was to have Josh find a cozy place that he could read while all this stuff was going on.  Josh was an avid reader.  This led him to discuss another fear.

Once again, I asked the parents how they could tell a different wedding story this time.  It was agreed that they would take Josh to the hotel a day before.  He would get to know where all the major events would take place and also find a reading spot that was calm and safe.  It was important that he felt comfortable with getting from one area to another.  His father agreed to do this with Josh and Josh agreed to go “as a trial”.

A few days after the wedding I received an e-mail from Josh’s parents. It seems that Josh is quite the planner.  The ability to ask questions that were important to his feeling safe and having them answered calmly has made a huge difference in Josh’s ability to problem solve.  He was fine at the wedding.  All the adults in his immediate family learned to “chill” as Josh later told me, and that is a major part of helping our children learn to think for themselves.  We parents and adults who play important roles in children’s lives, need to become more aware of how much we need to sometimes change our perspective so that we can be better guides for our children as they navigate a world that can sometimes be difficult and frightening to them.   It is a major pity that so many children live in this cocoon of fear, where they are constantly busy keeping themselves “safe”, when instead,  they could be out there enjoying their freedom and sense of self-reliance as they learn to face life as it comes.

So, while nearly all parents have specific qualities, values or behaviors that they want to impart to their children such as honesty, kindness, integrity and loyalty they are well advised to consider imparting to their children the ability to cope; how to be OK with a bit of discomfort in their life.”  Without this ability, as we have seen, a child grows up with a great disadvantage.

-Note: I am not dealing with sensory overload or dysregulation in this piece.  There will be a blog on this website discussing that issue in the near future.  This post is meant to assist parents of children who react too quickly and thereby overwhelm themselves.