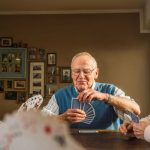 Any serious writer has turned to metaphor when trying to convey an important thought.    It is a way of getting the reader to really “see” what the author is saying.  Of all the topics to have been put through the metaphor spectroscope, LIFE must certainly be somewhere on the top.  The Bible itself often compares life to a “fleeting shadow” and “a blink of the eye” to mention only two themes.  This use of one concept to describe another has a purpose.  It is to imbue the main idea with a meaning or a conotation that is often overlooked.  Hence, since life passes like the blink of an eye – don’t squander it; make it count.

I like metaphors, so when I heard “The Gambler” on the radio last week, I smiled.  When it first came out, in my younger years, I found the lyrics quite clever.  Kenny Rogers, in his soft, gravelly voice conveys the wisdom of a man he met on a train.  This is a song about the card game of life.  In keeping with the metaphor, it is a rather pessimistic and powerless view.  I have come to see that now.  The only instructions about actually playing the game is to keep your cards close to your vest.  The rest is luck, a gamble.  And, if you win, don’t count your money at the table-that’s not safe.  If it gets too tough, you need to know “when to fold up” and “when to run”.  These tidbits are part of how to play the game well.  That was it.  It never went any further than that I never really realized the message it was conveying.  It was a time before I had the responsibility and joy of raising children.  But recently, while playing Rummikub with my grandsons, it occurred to me that the metaphor of life as a card game actually has much to recommend itself, it all depends on what sort of card game you chose.

From the very outset of the game of Rummikub, all players know that they are not “stuck with the cards they are dealt”. The whole point is to improve what you started out with. To use what you have in a way that can help you. I am continuously amazed at how these boys can completely turn their luck around with a bit of patience and ingenuity.  Tiles already on the table in neat sets of threes, fours and even entire suits are shuffled beyond recognition to accommodate their own hand. Jokers are claimed and used for furthering their own gains until their slate is empty.  The excitement they display of having won and, in a way, beat the system honestly, never fails to give me the sweetest joy.  “These boys will be alright”, I tell myself.  “They are willing to work to achieve a goal. Winning by being clever gives them satisfaction.”  What is more, they don’t quit in the middle of the game, even when it gets frustrating.  Once again, I find that the games children play can influence the values and behaviors they embrace later in life.

With no apologies to Kenny Rogers, “The Gambler” is not a wise man.  If dying is considered “breaking even” what’s the point? That really is no way to live.